The recent flood of old hindi movie DVDs in the market has made my trips to the local hindi video store more fun than usual. One finds unheard of movies on the shelves and "new" old movies (thought I had seen them all courtesy Doordarshan, in my childhood) come to light. One such find was 1955's Bandish starring Ashok Kumar and Meena Kumari. Now, Ashok Kumar is always a delight to watch, especially when he is in the lead. With Meena Kumari though, one always expects a tragedy. The DVD cover wasnt any help as it showed the changing faces of Meena Kumari from a young and beautiful actress to the more familiar tragedy queen. So, which of these faces would she wear in the movie? Having earlier experienced the joys of watching the young Meena Kumari in Azad, Parineeta and Miss Mary, I decided to take a chance and hope this one would feature the younger version. After watching the movie I was glad I did!

Mahendra (Nazir Hussain) has been bringing up the orphaned Tomato (why such a wierd name for cute little Daisy Irani?) but is worried about Tomato's future as he has been diagnosed with a terminal illness. He decides to find Tomato a new father and takes him to the park. Tomato is promised a meeting with his long lost father and told to stick by the father no matter what. In the park Mahendra settles on a rich wastrel Kamal Rai (Ashok Kumar) as the most likely candidate based on his generosity and kindness to a beggar. (That just shows what random acts of kindness can bring. I wouldnt be kind to a beggar now in case someone sic'ed their orphan on to me!) 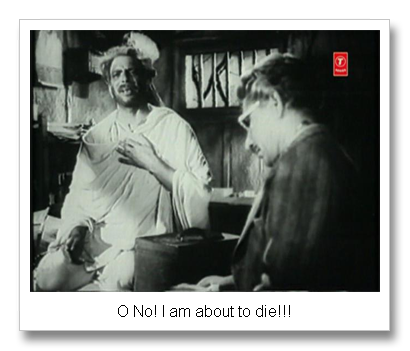 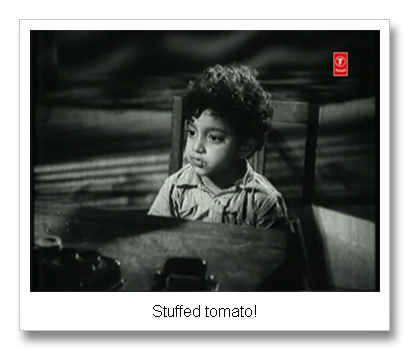 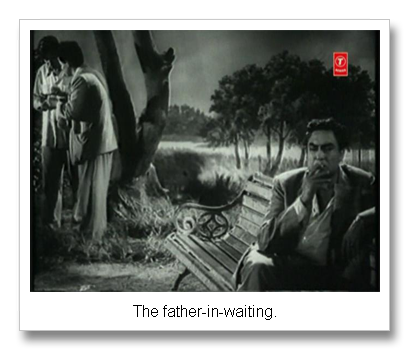 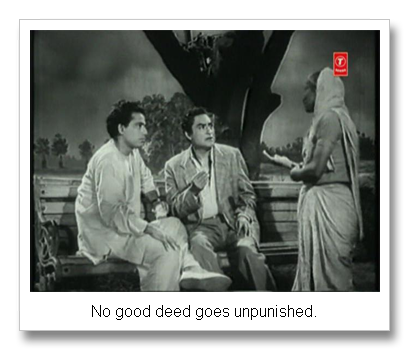 Kamal is a spoilt, rich young man flitting from girl friend to girl friend. His father, tired of his behaviour, has cut off his allowance. Hey wait! Isnt this supposed to be Dev Anand's role? What is Ashok Kumar doing dodging girl friends! He is supposed to play the noble side hero who sacrifices his love (usually for Meena Kumari) or the sterling character actor. O well, guess Dada Moni did play all kinds of leads once upon a time.... 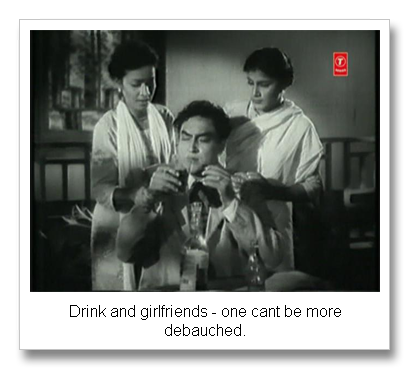 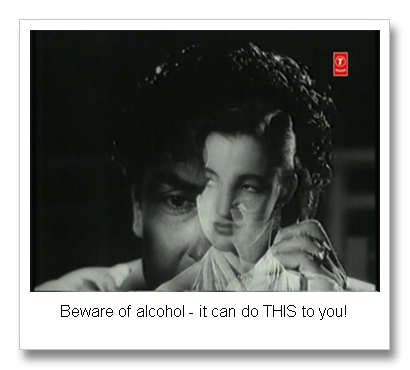 Coming back to the story: Tomato, convinced that Kamal is his father, proceeds to attach himself to Kamal like a limpet. All efforts on Kamal's part to convince Tomato, and the world at large, that he isnt Tomato's father are fruitless. The hapless Kamal is forced to assume temporary responsibility for Tomato, while he looks for ways and means to get rid of the scamp. The resultant chaos in Kamal's life makes for hilarious situations reminiscent of P. G. Wodehouse at his best. 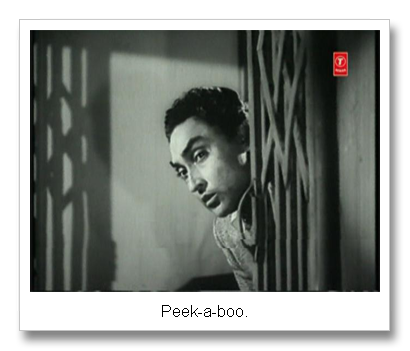 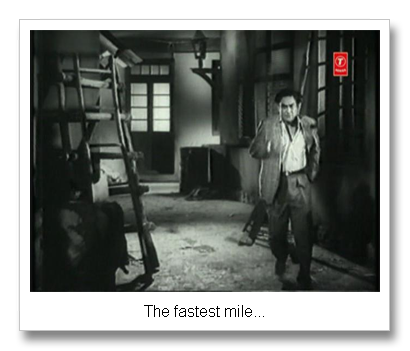 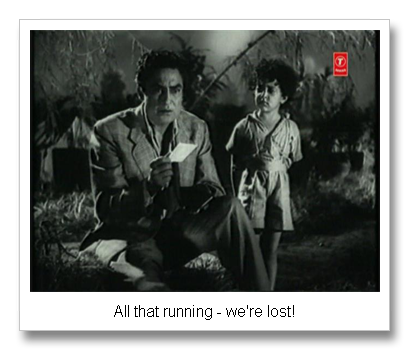 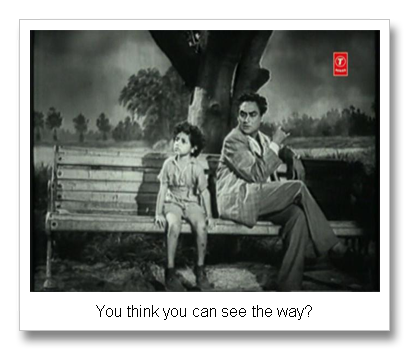 Meena Kumari plays Usha, Kamal's estranged lady love. You got it, he wasnt born a playboy. The two of them were in LOVE and danced into the sunset singing forgettable duets - before Kamal's father forbade the match. Usha being the upright woman that she was, refused to elope with Kamal and told him never to darken her door again. Kamal, in despair, took to drink and girl friends. (Some people will use any excuse to leave the straight and narrow path!) 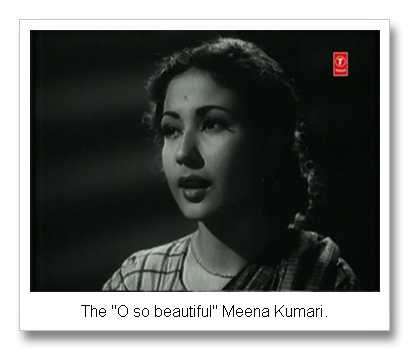 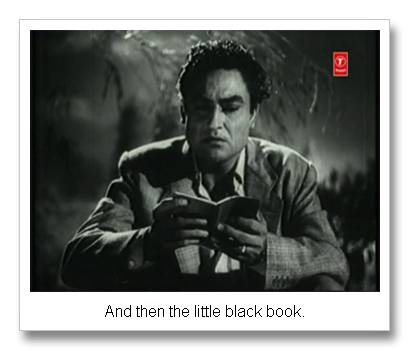 Kamal, having stopped being the idealist, decides to use Usha to get out of his predicament. He convinces Tomato that Usha is his Mom. Tomato now decides to stick to his Mom as well and Usha's life is in chaos, too! She is convinced that Tomato is Kamal's son by some other woman. Everyone else - including their respective families and spouses-to-be - is convinced that Tomato is Kamal and Usha's son. How does this tangled web sort itself out? What happens to Tomato? 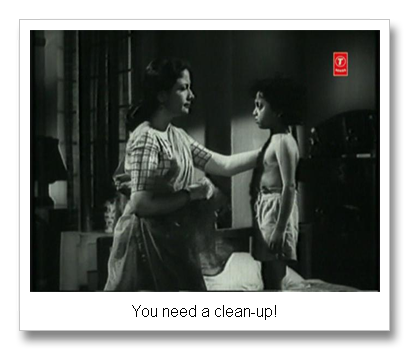 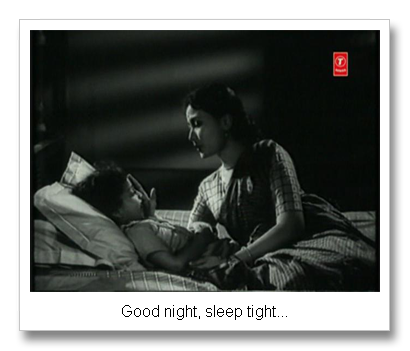 As I said before, Ashok Kumar is always a delight to watch. Before there was Naseeruddin Shah and Om Puri, there was Ashok Kumar. He always looked so natural, fitting any character with ease and a total lack of the dramatic hammings one associates with the "great" actors of his time. From romantic leads (Parineeta, 1953), anti hero (1943's Kismet and 1957's Ek Saal spring to mind), smooth villains (1967's Jewel Thief) to the standard second lead (Bahu Begum, Pakeezah, Gumraah - to name but a few) and the character actor who stole the show (1960's Kanoon, 1972's Victoria No. 203 are but a few cases in point) - Dada Moni did it all and with great elan. Hey this is fast becoming a tribute to Ashok Kumar and I meant a to write a review of Bandish! Guess you've got the point - I am a big Ashok Kumar fan!!! 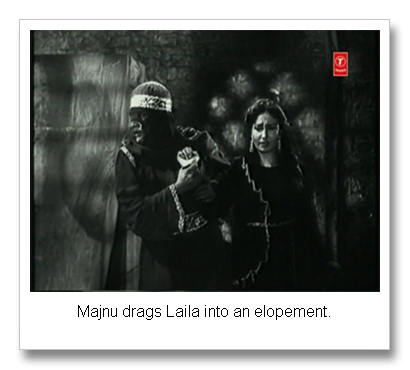 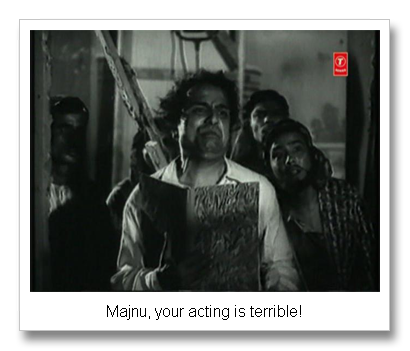 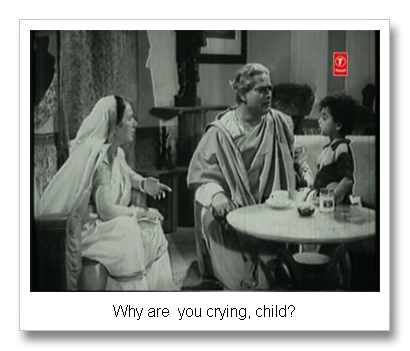 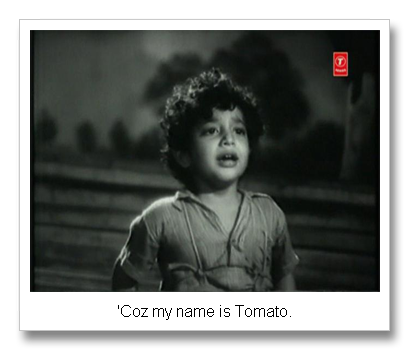 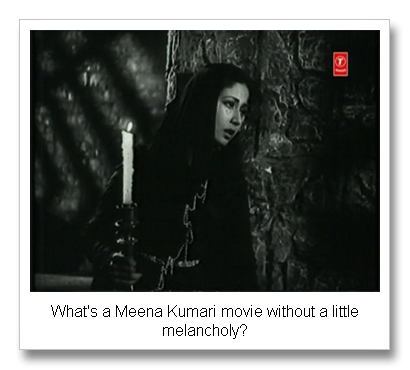 Back to the review: Meena Kumari looks beautiful but sadly, has very little to do in the movie. The action centres around Tomato and Kamal and Meena Kumari's Usha has very little scope to show what she's made of. In this limited canvas, she does manage to show herself as an upright modern woman who respects tradition but will tolerate no insults to herself. Her golden voice is as yet, not into poetry. Her looks however, more than make up for it and you can see where she got her reputation for beauty and acting.
Daisy Irani is adorable though a bit on the precocious side. A few years ago I happened to watch a Shirley Temple movie and was struck by the similarities between the two. Did Hindi cinema go out of its way to look for a Shirley Temple-like child artist?
The supporting cast was, well, supportive and the songs were forgettable. The movie was an entertaining, frothy comedy in the style of 40s Hollywood screwball comedies but with a touch of good old Indian social drama. A very good time-pass movie, in fact.
Posted by Bollyviewer at April 18, 2008