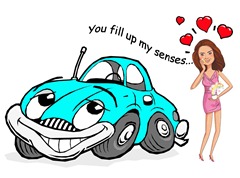 Between my new job and my new obsession, life has had no room for films in the past few weeks. What can possibly be so interesting that I have abandoned films? One word – CARS! Had someone told me even a month ago that I’d soon be interested in cars, I’d have thought they were crazy. Me? Actually thinking of cars as something more than a means to go from point A to point B? Ridiculous! But there is no denying it. I have caught the disease. From being a person who could only recognise one car – The VW Beatle – I’ve graduated to being a person who can now identify most major car makes (and some models, too) at a glance!

It all began when I made the decision to do my bit toward global warming by burning my fair share of fossil fuel. Why should the rest of the world carry my burden? Ergo, I must buy a car. But which car? I couldn’t pick a Lexus or a Honda or a… in a car park full of two cars! So how on earth do I decide which one to buy? “One does one’s research”, a wise friend pointed out. Aah yes! That is one thing I do know how to do. So I set out to do my research. But nobody warned me that a very serious side-effect of research on all things automative is car-o-mania. I’ve begun to actively notice cars in car-parks, on the road, on the internet, and yes, even in films! I clearly need professional help. While I get it, here’s a list of ten filmi cars that I wouldn’t mind receiving as a gift (Santa, I hope this is enough advance notice for you to get it right, this Christmas):